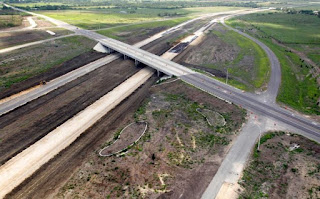 An 85 mph toll road between Austin and San Antonio will open October 24th, My San Antonio.com reports. The toll road boasts the fastest speed limit in the country.
The new toll road is an extension of Texas 130, which already runs between Georgetown and South Austin.  The new segment will connect south Austin and Interstate 10 in Seguin and will be free until November 10th.  Tolls of approximately $.15 per mile will be charged beginning November 11th, and can be paid for through either a toll tag or bills that will be mailed to drivers.  There will be no toll booths.
The toll road cost approximately $1.4 billion to build and is Texas’ first public-private toll road.  Texas owns the actual road and right-of-way, but a private group paid for the road’s construction.  A joint venture between the two entities, the SH 130 Concession Company will be responsible for the road’s maintenance and operations costs for 50 years and both the public company and the state will share in the tolls collected.
The new super-fast road is being touted with billboards bragging about the road’s speed limit, but there are a lot of concerns about safety.  Truck drivers and trucking companies have spoken out to say that it’s not safe for them to drive at such a high speed.
Looking for a San Antonio apartment convenient to the new toll road?  Apartments Now San Antonio can help!