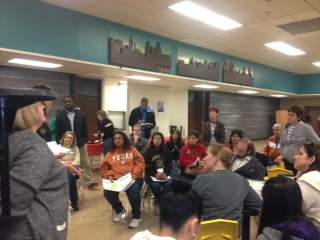 AISD’s all-boys school proposal has not been particularly popular with parents, Statesman.com reports. This past Saturday, AISD held a meeting at Crockett High School to discuss one proposal being put forth that would put the school at Covington Middle School.
The school district maintains that AISD is still listening to feedback from parents and community members on where to put the school, if it is established at all.  The Moody Foundation has said they will pay as much as $4.6 million for the first five years the school for young men is open.
Most parents weren’t sure that there really are benefits to single-gender education and vehemently opposed co-locating the campus at Covington for as much as three years until the boys’ school takes over the campus entirely.  Instead, parents suggested that AISD look to a philanthropic organization that would be able to raise the $30 million necessary to build a new single-gender school.
AISD has also suggested using a middle school that is under-enrolled or the Alternative Learning Center as possible locations for the school.  The ALC was thought to be a less disruptive and good central location for transportation, but some thought that using a campus for disruptive students wouldn’t appeal to West Austin parents.
AISD continues to strongly push the concept of a young men’s school, nearly denying that the research on the benefit of single-gender schools has been mixed.  This led to a lot of skepticism on the part of parents.
Looking for a great Austin apartment near AISD schools?  Apartments Now can help!