Alamo Gets Letter By Travis 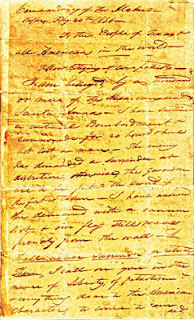 The Alamo will get a letter written by Lt. Col. William Barret Travis, My San Antonio.com reports.  It is the famous “victory or death” letter and the Texas State Library and Archives Commission voted 6-1 Wednesday to allow the loan, over objections from the Texas General Land office.
The Texas Land Commission is now responsible for coming up with approximately $100,000 to pay for transportation, security and other costs related to displaying the letter, largely a custom-built shatterproof display case.  The Texas Department of Public Safety has promised to be in charge of transporting the letter safely and helping to protect it while it is displayed at the Alamo from February 23rd to March 7th.
The Alamo Rangers, who are in charge of security at the Alamo, have a plan that moves the letter to a secured vault if an emergency comes up.  They also will enforce a strict ban on electronic devices because of worries that flash photography could damage the letter.  Even iPhones won’t be allowed in the Alamo while the letter is on display.
The letter is dated February 24th, 1836, and in it, Travis, the Alamo commander, called on “the people of Texas and all Americans in the world” to come to the aid of Texians in their fight against the Mexican army in the fight for Texan Independence.  The letter has been put on display eight times, but never in San Antonio.
Looking for a great San Antonio apartment with easy access to the Alamo?  Call Apartments Now San Antonio today!