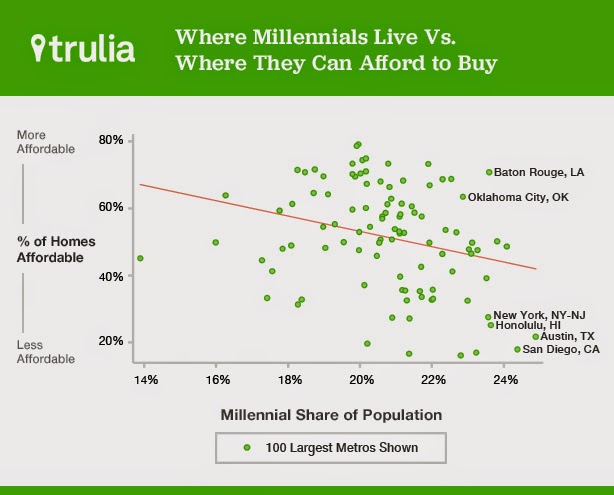 Austin is the 5th Least Affordable City for Millennials to buy a house in, according to a report by Trulia, shared by the Washington Post.  The study found that many Millennials are living in cities where they can’t afford to purchase a home.
In Austin, 20-34 year olds (the millennial age range), comprise at least 23.5% of the population, putting it in the top ten of cities in the country for millennial population.  However, only about 20% of the houses for sale in Austin are affordable for millennial buyers (payments including taxes and insurance are equal to 31% or less of their income).  Many millennials rent, but 93% of them say that they want to own a home one day.
There are many other cities across the nation with much more affordable housing, but millennials have a different set of wants in housing, and these cities aren’t where they want to be.  If you’re happy in Austin, Texas, you probably don’t want to pick up stakes and move to Akron, Ohio just because it is the most affordable city for your age group.  Many young people face a difficult choice about living in the city they love or moving to one they can afford.  Luckily, Austin has lots of beautiful suburbs and areas just outside the urban core where one can still find good deals on houses and apartments. Also, as most people get older, than earnings increase, so home ownership may eventually be within the millennials’ grasp.
Renting is a great alternative to the current high prices of home ownership in Austin.  Austin Apartments Now can help you find an apartment that fits in your budget and where you want to be!  Give us a call today at 512-258-8224.