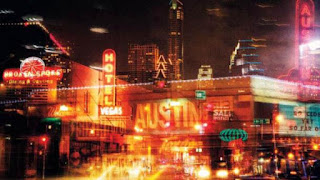 Whether you’ve lived in Austin all your life, or just moved here five minutes ago, John Spong’s Texas Monthly’s piece on Austin’s growth is a must read.  While essentially an opinion piece commenting on the oft-repeated refrain, “Austin was better when I moved here”, it is also packed with history of what went into making Austin Austin, since way back when it was founded in the 1800’s.
Republic of Texas’ vice president Mirabeau B. Lamar moved the capital of Texas to Austin in 1839 because he was so inspired by the scenic surroudings of our fair city.  It was the terrain of Austin that drove the city to become a hub for retail and commerce instead of a home for big farms, which attracted open-minded residents.  These progressives led to Austin being one of the few areas of Texas that was against seceding from the Union in 1861.  The opening of the University of Texas in 1883 made sure the city would be forever young with the influx of college students and the jobs at the University, as well as the thousands of jobs at the state Capitol, guaranteed that steady employment could always be had.
Due to these three factors, natural beauty, college students, and state employers, Austin has continued to grow in population at basically the same rate for the last seventeen straight decades.  The building of the dams on Lake Travis in the 1950’s and 1960’s led to Austin being seen as a great place for tourists and locals alike to go and experience the outdoors.  The infamous claim to being “Live Music Capital of the World” started with Willie Nelson’s arrival in 1972 and led to an entire scene which birthed scores of popular acts ranging from Stevie Ray Vaughn to Spoon.  The tech revolution first began in 1983 when computer company MCC moved here.  Large scale philanthropy and high-end restaurants eventually grew out of the arrival of the techies.
Decisions made by city government also shaped the Austin we have today.  In 1997, Mayor Kirk Watson, who is currently Austin’s state senator, brokered peace between developers who wanted to build subdivisions to house the influx of people coming to Austin to work in the booming tech industry and environment-minded citizens who spoke in defense of the Edwards Aquifer.  His solution was to stress that transplants were moving here because of Austin’s beautiful scenery and that protecting that would make great financial sense.  The powers that be starting pushing development in downtown, a wasteland of empty parking lots and abandoned car dealerships, and simultaneously used bonds to purchase 60,000 acres in the Edwards Aquifer recharge zone.  The result is that Barton Springs has maintained its pristine beauty and downtown has become a destination around the clock.
The “Keep Austin Weird” mantra grew out of a fight waged in 2002 by Waterloo Records and BookPeople to prevent a Borders Books and Music from moving in near their 6th and Lamar stores.  The stores adopted the motto, printing it on bumper stickers, and they also paid for a study that showed that for every $100 spent in a chain store, only $13 remained locally, while for every $100 spent at a local business, $45 remained in the area.  Borders stayed away (perhaps also influenced by the economic downturn), but the wisdom gleaned by the study continues to influence decisions made by both city hall and developers.
The Second Street District, the South Congress transformation to SoCo, and even Rainey Street all grew out of Watson’s goal to push dense development in city centers.  All three areas have remained largely homes for locally owned businesses.  So while the closing of Les Amis and the Armadillo World Headquarters and Emo’s move to East Riverside may still inspire bellyaching, Austin’s culture depends on its ability to evolve.  In other words, the more things change in Austin, the more they stay the same.
Looking for an Austin apartment where you can Keep it Weird?  Apartments Now can help!