Emily Morgan Hotel Gets a Makeover 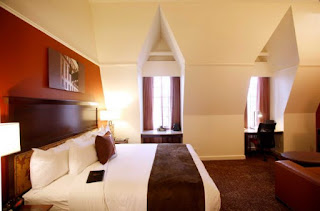 The Emily Morgan Hotel in downtown San Antonio is in the midst of a $5 million renovation, My San Antonio.comreports.  It will also become a Doubletree by Hilton Hotel when the renovations are completed in December.
The entire interior will see upgraded floors, furniture, tubs, tile, beds and paint, from the 177 rooms to the lobby and restaurant. The 1920s Gothic revivalist exterior will not see any changes.  The building was originally called the San Antonio Medical Arts Building when it opened in 1926, but has been a hotel since 1985.  A $3 million renovation was started in 2000, but stopped when the September 11th attacks happened and was never completed.
The Emily Morgan is the official hotel of the Alamo and sees the seven-year agreement with Doubletree by Hilton as a way for the hotel to become more visible, especially to business travelers.  All of the hotel employees will be required to go through at least 100 hours of hospitality training under the deal.
The hotel saw an increase to almost $5 million in revenue for the three month period of July through September, which was up roughly 7 percent from the same period last year.  Hotel occupancy also went up 5 percent to almost 65 percent and revenue per room was also up 5 percent to $77.12, a figure still below downtown’s average of $91.17.  However, it is expected that the reboot of the hotel’s interior will improve all revenue figures for the Emily Morgan dramatically.
Looking for an apartment that feels like a luxury hotel?  Apartments Now San Antonio can help make it happen!