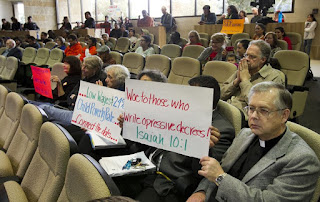 Incentive deals will be required to pay at least $11 hourly in Travis County, Statesman.com reports.  In other words, companies who want to set up shop here and get a tax break will have to pay a living wage to their employees.
The new wage will apply to construction workers as well, who currently only get roughly $7.50 an hour.  The new rules came about after both Austin and Travis County were criticized about the incentives they gave to companies such as Apple and Marriott.  Tuesday’s rules marked the first official policy governing incentives.
A City Council committee also said that Austin should make the $11 hourly rate standard for any companies they give incentives to as well.  Mayor Lee Leffingwell is against the minimum, which he believes will push companies to relocate in other cities and that it might hurt Austin’s economy.  The Austin Chamber of Commerce and minority contractors also spoke out against the changes.
The Austin Chamber of Commerce Vice President said that among the most recent incentive deals the city and county have engaged in, the only one that would meet the new hourly wage requirement is the one with Apple, who will be paying $12 an hour for construction at its new North Austin location.
Looking for a great new Austin Apartment near all of the action?  Apartments Now can help!