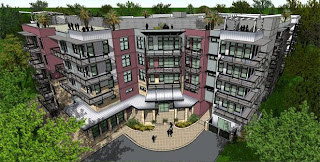 A new apartment complex that will have 225 high-end apartments is set to break ground this week, according to Statesman.com.  The complex replaces the Mobile Manor RV park and is on the land just to the east of Chuy’s on Barton Springs Road.
The new five-story complex will be named Coldwater and should see the first units completed at the beginning of 2014.  The lofted units with 10-foot exposed concrete ceilings and seven-foot windows will face the Butler Park ballfield and the hike-and-bike trail.  In addition, it will feature a rooftop deck that has views of Lady Bird lake, downtown and Zilker Park.
There are a total of 1,000 rental units planned or being constructed in the area, including another building with 223 apartments to the west of Chuy’s, set to start construction this fall.  Along South Lamar, two complexes are currently being built, one with 298 units and one with 202.  South of Uchi on South Lamar, a new complex set to have 340 units will begin construction in October.
The company who had a dense mixed-use 400 apartment project planned for Lamar Plaza, where Alamo Drafthouse South is, no longer has it under contract.  However, they still hope to have a project there in the future.
Some neighborhood activists are still concerned about the multi-family boom and what it will mean for traffic, but a city official who is in charge of reviewing new development applications thinks that development along targeted roads “will create a stronger demand for alternative transportation modes” that will reduce automobile traffic eventually.