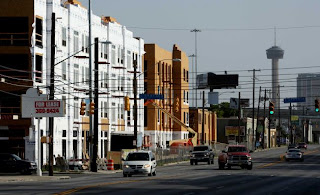 Broadway near the Pearl Brewery is seeing tons of new development, thanks in part to $20 million in city incentives that lured developers to invest $200 million in the area.  The neighborhood is set to see roughly 1,200 new residential units in the next few years, My San Antonio.com reports.
The neighborhood was the site of high crime, prostitution and drug traffic for several years, but residents are already seeing the redevelopment push the undesirable elements out of their neighborhood.  Residents are excited about the changes that will allow them to either sell their houses at a huge profit or to renovate.
Developers are attracted by the neighborhood’s closeness to the Pearl and the Broadway corridor.  They hope to create not only residences, but spaces for small, local businesses which will “keep the community going.”  Developers are also attracted to a planned street car system for the area which will make the location even more desirable.  The area is in a transitional phase, according to investors, but will never go back to the crime-infested area it was.
One of the big upcoming projects is small 17-unit condo building that will be built at Casa Blanca and North Alamo streets.  While this is currently home to a decrepit building, that will be demolished to make way for the 1,000 square feet two bedroom, two bathroom condos that will be priced from $269,000 to $319,000.  Due to the small size of the lot, condos made more sense than rental units.
Looking for a great San Antonio apartment in a hot area?  Apartment Experts San Antonio can help you get near all the action!