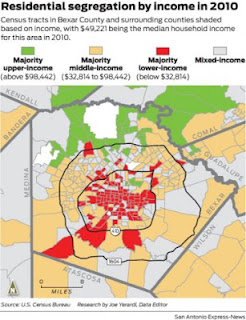 San Antonio residents live largely segregated by income, according to a new study released by the Pew Research Center, My San Antonio.com reports.  In the last three decades, San Antonio, Houston and Dallas have become the most economically segregated cities in the United States.

Wealthy people in San Antonio and its surrounding areas are the most likely in the country to live among other wealthy people.  38 percent of San Antonio’s poor residents are in an area where a majority are also poor, ranking it third on that end of the scale.

Economic segregation used to be much more likely to be a problem in aging industrial cities like Detroit, Philadelphia, and Baltimore, but due to the South and Southwest’s large population increases, Southern cities are now even more economically segregated.  In the last ten years, Texas added over 4 million people, making it the fastest growing state in the country.  Roughly 50 percent of the people who came to Texas were from other states and countries to work at low-skill, low-wage jobs.

There are many downsides to economic segregation and it affects economic development, education and other public policies.  As a political professor at SMU puts it, “the detriment to the wealthy living among themselves is that they have less and less understanding of the real-life problems faced by the poor, what it means to be poor.”  Low-income people who are pushed into poor neighborhoods find it harder to access good schools, jobs, and transportation and this disadvantage can continue for generations.