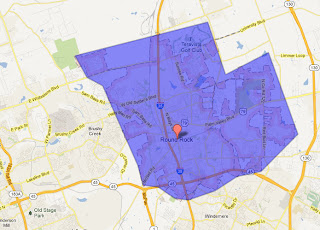 This month we will be exploring Round Rock, a suburb just north of Austin, Texas.  Round Rock is popular with residents because of its strong school system, variety of employers, and location just 17 miles north of Austin.  Round Rock was named for a large Anvil-shaped rock that marked a low-water crossing for cattle, wagons and horses in Brushy Creek and was settled in the 1850’s.
Apartments in Round Rock, Tx tend to offer a smaller community feel, much like the city itself.   They also tend to follow the latest resort-style trend for apartments because Round Rock’s growth explosion is fairly recent and land is plentiful.  You will find lots of newer, larger, master-planned apartment communities with a long list of amenities like resort-style pools, sports courts, luxury club houses, open floor plans and high-end interior finishes, but for a better price tag than many Austin apartments.
Another driving factor for Round Rocks is the job market. There are many large employers like Dell, IKEA, the Round Rock Outlet Mall, and the Westinghouse Plant in addition to all the small business employers that have popped up with Round Rock’s recent growth. One of its latest areas of growth is in higher education. Texas State has a satellite campus in Round Rock, as well as the Texas A&M Health Science Center College of Medicine and Concordia Lutheran.
Regardless of your reason for wanting an apartment in Round Rock versus Austin, you will still have easy access to Austin. The cities are connected by two large thoroughfares – I35 at the east end and 1325/Mopac at the west end. The I45 toll road also provides easy access directly into northwest Austin.
Looking for an apartment in Round Rock?  Apartments Now can help!