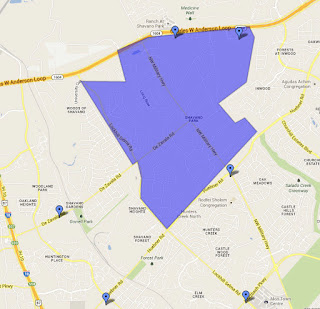 This month, we’re spotlighting the Shavano Park Neighborhood of San Antonio, Texas.  This week, we’ll be taking a look at the schools and employers located in this popular area of San Antonio.
Shavano Park is served by the Northside School District.  Students in grades nine through twelve attend Tom C. Clark High School, whose mascot is the Cougar.
Middle School students who reside in Shavano Park attend Hobby Middle School, a TEA Recognized school.  Hobby’s mascot is the Hawk and their colors are Purple and Gold.
Shavano Park students in Kindergarten through fifth grade attend Blattman Elementary School whose mascot is the Black Bears.  Blattman is an Exemplary ranked school.
There are many employers located close to Shavano Park, including those in downtown San Antonio.  Shavano Park is just fifteen miles from downtown San Antonio.
Clear Channel Communications is a huge company that has their headquarters less than a 20 minute commute from Shavano Park.  Clear Channel was founded in San Antonio in 1972 with the purchase of a single radio station.  It now has both the radio division and an outdoor advertising division that focuses on billboards and together they employ over 20,000 people around the globe.  Clear Channel’s 850 stations reach more than 110 million listeners weekly and make it the largest radio station owner in the country in both number of stations and revenue.
Looking for an apartment in Shavano Park?  Apartments Now San Antonio can help!  Give us a call today at 210-558-7377 to take advantage of our expert knowledge of the vacancies, move-in specials, and amenities at all the best Shavano Park addresses.
Want to learn more about Shavano Park?  Check out our other articles…
Shavano Park Overview
Shavano Park Dining and Entertainment
Shavano Park Apartments