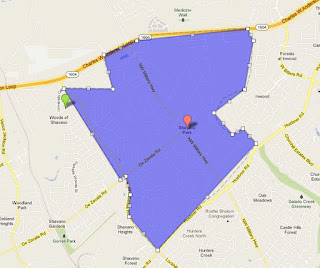 This month, we’re going to be exploring Shavano Park, a suburb of San Antonio, Texas.  Located just twelve miles north of downtown San Antonio, Shavano Park is a city within a city, surrounded by San Antonio on all sides.  Shavano Park is bounded by Loop 1604 to the north, Huebner Park on the south, Lockhill Selma on the west and Salado Creek on the east.  Shavano Park is popular for those looking for an easy commute into San Antonio, well-rated Northside School
District Schools, and its proximity to the Texas Hill Country.
Shavano was first started in approximately 1881 on the banks of Olmos Creek.  It was originally a stagecoach and rail stop between San Antonio and Boerne.  The City of Shavano Park was once part of Stowers Ranch, but in 1947, Wallace Rogers and Sons bought the land and begin turning it into a residential development in 1948. The City of Shavano Park was incorporated as a general law city in 1956, a designation conferred upon Texas towns of less than 5,000 people.
Currently, there are about 3,000 residents of Shavano Park.
In the coming weeks, we’ll take a look at the dining and entertainment options, schools and employers and apartments that make this affluent suburb such a popular place to live.
Looking for an apartment in Shavano Park?  Call Apartments Now San Antonio today at 210-558-7377 to take advantage of our extensive knowledge of vacancies, move-in specials and amenities in Shavano Park!

Want to learn more about Shavano Park?  Check out our other articles…
Shavano Park Dining and Entertainment
Shavano Park Schools and Employers