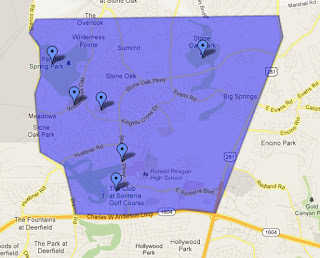 All this month we’re spotlighting the Stone Oak Neighborhood of San Antonio, Texas.  This week we’ll be discussing the schools and employers in this far North Central suburb.

Employers near Stone Oak include Valero Energy Corporation, which has their corporate headquarters just a 20 minute drive away.  This Fortune 500 company is the world’s largest independent petroleum refiner and marketer.  Valero ranked number one on Fortune Magazine’s Best Big Companies to work for list for two consecutive years.  Valero employees donate hundreds of thousands of hours to volunteer for many community projects in San Antonio.  Valero and its employees also donate millions of dollars to local charities such as the United Way.

Clear Channel Communications is another corporate giant that has their headquarters less than a 20 minute commute from Stone Oak.  Clear Channel was founded in San Antonio in 1972 with the purchase of a single radio station.  It now has both the radio division and an outdoor advertising division that focuses on billboards and together they employ over 20,000 people around the globe.  Clear Channel’s 850 stations reach more than 110 million listeners weekly and make it the largest radio station owner in the country in both number of stations and revenue.

Looking for an apartment in Stone Oak?  Apartments Now San Antonio can help!