Texas’ refusal to join the Medicaid expansion, announced by Governor Rick Perry Monday, will cost hospitals, clinics and taxpayers a lot, according to local health care officials.  Statesman.com reports that these leaders predict higher costs for taxpayers and patients with insurance to cover the shortage. 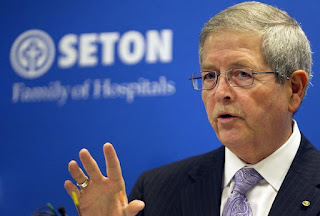 Perry sent a letter to the federal government Monday stating that he refuses to expand Medicaid as the new federal health care law expects because it would “threaten even Texas with financial ruin.”   He’s also bothered by what he sees as an intrusion into states’ rights.  The Texas State legislature, which is controlled by Republicans, is expected to agree with him.

However, patients without insurance will still have to get their medical care somewhere, most likely at hospitals and emergency rooms which have a higher cost for care.  They also will be likely to utilize clinics that take care of uninsured people and people on Medicaid, the state-federal program that pays for care for the poor, disabled and many nursing home residents.  So the bulk of the cost will fall to local communities.

Central Health officials believe that a Medicaid expansion would save Travis County’s public clinic system $7-$8 million a year.  To pay for uninsured people who cannot pay for their care, hospitals will charge paying patients more and this will likely result in higher private health insurance premiums.

About 360,000 people in Travis and other area counties are uninsured, and many would have gotten on the Medicaid rolls if the expansion had happened. Statewide 1 in 4 Texans, 6 million total, do not have health insurance.  Due to this, Texas had been set to get a large share of federal money to expand Medicaid, about $13 billion a year, starting in 2014.  The federal government would have been responsible for all of the costs of the expansion until 2017, when the state would start sharing costs up to 10 percent by 2020.

Looking for an apartment where you have easy access to amenities like hospitals?  Apartments Now can help!