Water Returns to the Hike and Bike Trail Soon 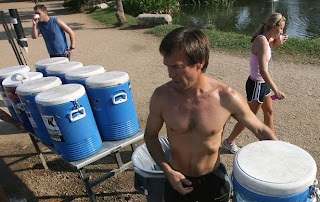 Water on the hike and bike trail has been provided for years by running stores, such as RunTex and Rogue, but the City shut down the water stands 3 weeks ago after learning that permits were required by state law, Statesman.com reports.
Health Department Officials are concerned about the water being safe to drink, not being tampered with, and that the containers are being cleaned out properly.  Otherwise, drinkers could get very sick.  The Parks Department sees the water stands as a great trail amenity and is going to work with the stores putting out the water to pay for the approximately $400 worth of permits that are needed.  The City is also going to make stations that keep the containers secure and the lids locked.  Stations should begin coming back to the trail in mid-January.
RunTex says it costs them approximately $3,000 monthly for the water, ice and cups and pay staff to put out the water.  The owner is in the process of securing permits so he can keep putting out water and plans to put out jugs that cannot be tampered with in January.  He sees the permits as a benefit because they will demonstrate that RunTex is “complying with health standards.”  He also says now is the best time to deal with this because people are much less likely to suffer from heat exhaustion in the cooler winter weather.
Rogue Running, in contrast, says they will not pay for permits, seeing their free service as something that benefits the community and shouldn’t incur additional expense.
Park officials would prefer more water fountains over water coolers along the trail, but fountains that are currently on the trail often don’t work and the city turns them off when the temperature is below freezing to prevent frozen pipes.  For now, the city and RunTex advise people to stay hydrated by bringing along their own water.
Looking for a great apartment convenient to the trail?  Apartments Now can help!