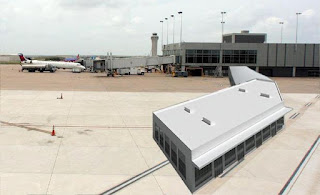 A $5.5 million Customs Facility is being considered by the city for Austin Bergstrom Airport to handle the extra traffic that is expected to be generated by Formula One racing, Statesman.com reports.  The concern is that the current customs and immigration facility at ABIA isn’t big enough to process Formula One charter flights.

The city would pay for the facility rather than trying to get the organizers of Formula One to pay for it.  Officials have the perspective that if incoming international travelers are not processed quickly and efficiently, it will tarnish the city’s image.  The city also plans for the new customs building to handle large European commercial flights that the city is hoping it can attract.

The city plans to expand its permanent customs and immigration facility, but hopes this temporary facility would be used for about three to five years.  The hope is that it will help with other large events such as South by Southwest and the Austin City Limits Music Festival.  The future benefit to Austin is the reason that Circuit of the Americas, the race organizer, does not believe they should have to contribute to the cost of the facility.

There is no way to predict how many charters ABIA will see due to the race, because charter carriers do not have to let an airport know they are coming until 30 days before they arrive.  Based on the experience of other cities, officials expect Austin to get several chartered jumbo jets carrying 350 or more people from around the world in the days before the race.

The alternative to building a temporary facility is to route flights to Dallas or Houston and then require race attendees to get a flight to Austin or to drive or take a bus to get to their final destination.  The worry is that this would not boost Austin’s image as an international travel destination.  The other worry is that even if it is approved, there is not time to get the facility finished before the race, which is expected to happen in November.

Looking for an apartment that feels customized for you?  Call Apartments Now today and let us help you get into the place of your dreams!