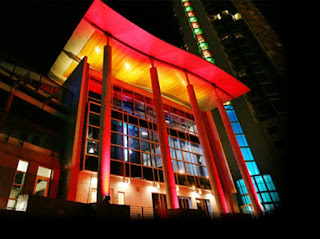 The Austin Music Hall will be demolished, Culturemap reports, to make way for an office tower.
The Austin Music Hall was built in 1995 and had a multi-million-dollar makeover in 2007, but still struggled.  The owners filed for bankruptcy in 2012.
In fall of 2014, it was purchased by Cielo Property Group, who has unveiled plans to turn it into a 28 story glass office building.  The space will have traditional office space and three larger sections with an open concept layout.  The ground floor will be for retail or restaurants. Construction will start early next year and is scheduled to be complete by the end of 2017.
The current owners said that downtown office space continues to be in demand, and even with all the new construction, space is still scarce.  The new office building will offer a great location with fantastic views and lots of amenities in the building and close by.
Cielo will still own the Austin Music Hall brand and is on the hunt for another smaller music venue to open using the name.  Concerts and events will be held at the current location through the end of the year.
Looking for an #apartment near the hubbub of downtown?  Give Austin Apartments Now a call today at 512-258-8224.