Flying the American Flag properly is an important lesson to learn, especially today when we celebrate our independence.  Apartment Therapy.com reads the U.S. Flag Code and imparts the important stuff to us. 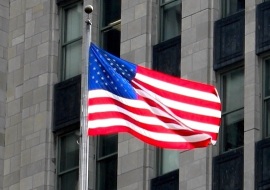 The flag code was drafted in 1942 by President Roosevelt as a set of rules for civilians to to use when displaying the American Flag.  Not following the code has no legal repercussions, but it is encouraged so that the flag is shown the respect it is due.

A United States flag is required to have 13 alternating red and white horizontal stripes and fifty stars representing all fifty states.  To raise the flag, you should do it quickly and when you are lowering the flag, it should be done slowly and ceremoniously.  The flag should be saluted at both times.  A flag should only be flown during daylight hours, unless it is illuminated.

If a flag is hung from the window or balcony of your apartment, or a building, the union, (the blue square with the stars), should be at the top of the flag staff unless the flag is at half-staff.  When hanging the flag over a street, it should be hung vertically with the union facing north or east.  The flag should not be displayed in rain or snow unless it is an all-weather flag.

When the flag is no longer fit to be displayed, it should be discarded in a respectful way, preferably by burning.  There are many more guidelines for making sure our flag is shown the proper respect, be sure to read them all at Apartment Therapy.