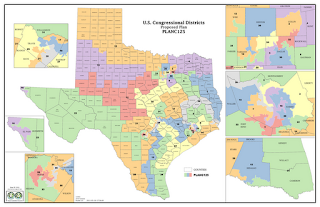 Texas Redistricting Maps are in the process of being challenged by several minority and Democratic groups, My San Antonio.com reports.  The groups filed a request for a preliminary hearing in federal court yesterday, which is the first step in challenging the maps.
Tuesday, a federal judge panel in Washington, D.C. said that the Texas Legislature’s redistricting maps could not stand, pointing to evidence that they were put together with a discriminatory intent and would keep minority communities from being able to vote for their representation.  Those maps were never used for elections, but they were used by a panel of three federal judges in San Antonio to make interim maps for the 2012 election.
The challengers, including the League of United Latin American Citizens, hope to get the lines redrawn to be legal, constitutional and in compliance with the federal court’s order.  They are asking the original panel of San Antonio judges to call a status conference as soon as possible.  While they are able to redraw maps under the law before the November election, it is a nearly impossible task as the deadline to print and mail ballots is less than a month away.
If the court does make changes, Texas Attorney General Greg Abbott would be able to ask the U.S. Supreme Court to intervene.
However, there are options, such as keeping the interim maps and making changes after the election, keeping the interim maps and making the Legislature redistrict again, making little changes to the current interim maps prior to the election, or an entire redo of the redistricting map that would include the problems identified by the D.C. court.
If they choose to completely overhaul the map, it could result in a new filing period and several districts races could become “jungle primaries”, where anyone could run for a seat no matter what party they are from, and the top two vote winners would advance to a runoff.
Many observers don’t think the San Antonio panel will do anything because of the multitude of problems changes could cause.  For now, election officials are continuing on the current path.
Looking for a San Antonio apartment?  Regardless of your voting district, Apartment Experts San Antonio can find you a great place today!