New Eastside Apartments to be Built 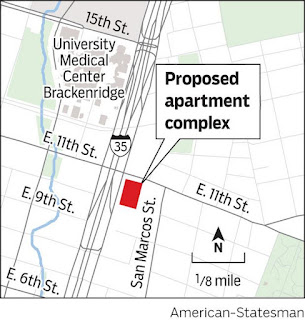 257 New Apartments will soon be built at the southeast corner of 11th Street and I-35, Statesman.com reports.  Today, Austin-based developer Forestar Group, Inc. said that it will partner with Canyon-Johnson Urban Funds LLC to begin construction on the new complex in the next month.

Canyon-Johnson, a private equity fund owned by Magic Johnson’s company and Canyon Capitol Realty Advisors, also worked with Stratus Properties Inc. to build the W Austin Hotel and Residences downtown.  The new complex will be at 807 E. 11th Street and will be called Eleven.  The first part of the project will contain 83 units and is slated to be complete by late July of next year.

The complex will include studios, lofts and one and two-bedroom units, however rents have not been announced yet.  Residents will be able to take advantage of downtown and Capitol views as well as a pool, rooftop deck, courtyard with outdoor living area, a clubhouse and a fitness facility.  Eleven will be a four-story building above a two-story parking structure.

The new project will capitalize on Austin’s tight rental market and will join a host of new mixed-use retail and office buildings, restoration projects and city projects that are going into the area.  The City and the Austin Urban Renewal Agency have already put nearly $20 million into the East 11th Street neighborhood in an ongoing effort to attract more private developers to revitalize the area.