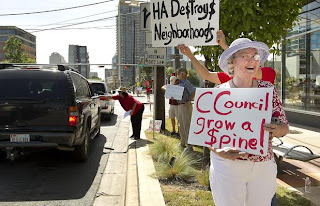 Short-Term Rentals and their regulation have been a contentious issue across the country.  Now it’s Austin’s turn.  The City Council is set to approve a policy next week allowing commercial short-term rentals in neighborhoods, Statesman.com reports.

Both those who are for short-term rentals and against them have been fighting hard to have their voices heard through the media, online petitions and protests.  The short-term rental market is estimated to comprise more than 3 million properties nationwide.  New York, San Francisco and Portland, Oregon have banned short-term rentals entirely, while Maui, Hawaii allowed them, but sets a cap of 400 properties and makes renters pay a 9.25 percent hotel tax.  So far, Austin hasn’t imposed any regulations at all.

Neighborhood groups opposed to the rentals are concerned that they “hollow out” urban neighborhoods by keeping houses out of the hands of potential residents and in the hands of what are essentially business owners in a residential zone.  With a shortage of urban housing already a problem, and urban neighborhood schools already in danger of closing because of decreased attendance, neighbors see short-term rentals as a real threat to their way of life.  Recently, many people in the short-term rental opposition protested in front of the headquarters of “Home Away”, a service which allows owners to rent out these properties online.

Those in favor of the short-term rentals, such as the president of the Austin Rental Alliance, says that a ban on residential rentals of less than 30 days won’t work and cities are also missing out on the chance to collect hotel taxes.  He worries that a ban will just drive short term rentals underground.  They also see the ban as an infringement on property owners’ rights.  Portland, Oregon has a person on staff just to peruse online rental listings to find violators of their ban.

Looking for an apartment where you can start your own staycation?  Apartments Now can help!