The San Antonio Apartment Market Experienced A Big Year In 2016 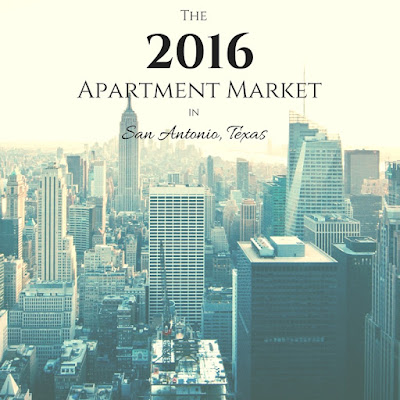 2016 was a big year for the multi-family market in San Antonio, with several major apartment complexes coming to life and rent rates on the upward trend. When it comes to real estate we all know – location, location, location. If you have found yourself flirting with the idea of renting in the Alamo City, we give you the 4-1-1 on the apartment market so that you can make the most of your rental dollars.

Downtown
846 units were added which is way more than the 464 that were built downtown in 2015. The average rent for a one-bedroom downtown apartment rented for $1,148 which was a 1.8% drop from last year. The surplus of new downtown units being added to the market probably was the catalyst for the drop in the rent rate.

Far Northwest
A lot of new apartments were built between the booming intersection of Loop 1604 and Interstate 10 last year, bringing 711 new units to the Far Northwest area.

Far West Side
Popular because of the highly recognizable Alamo Ranch master community, the far West Side, added far more apartments than any other part of the city.  1,278 new apartments were added last year, up from the 1,238 built in 2015.

South Side
Rent went up 8.2% last year on the South Side of town. New apartments were built near Brooks City Base, adding much needed apartment living which also drove the cost of an average one-bedroom unit to $687.

West Side
Also experiencing the soaring rent, the West Side of San Antonio costing renters an average of 8.5% more in rent for a one-bedroom apartment.

East Side
East Side was not left out in the rising rent movement. With a 7.4% increase you will now find yourself paying on average $569 for a one-bedroom apartment on the East Side of San Antonio.

North Downtown
North of downtown but south of Loop 410, the Historic Pearl,  Monte Vista, and other neighboring areas, saw rent increase by a dramatic 17.5%.  The area has become a popular luxury apartment market, and it will now cost you an average of $786 if you want to rent a one-bedroom in the area. .

With the strong growth in the economy and stable housing market, investors are attracted to the Alamo City. Just because rent is on the rise does not mean you have to pay more. Work with a housing expert to help get you the best deal for your rental dollars. Call our apartment finders at Apartments Now today!

A version of this article previously appeared on Express News.